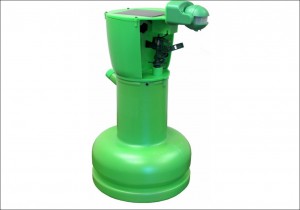 Many motion sensor sprinklers make use of a hose connection, which is why they tend to look pretty similar to one another. However, this model takes a different approach. Instead of attaching it to a hose, the sprinkler uses its own water supply which is fairly easy to refill.

In some ways, this approach is less convenient, as you have to pay attention to the water in the sprinkler and refill it regularly. If the sprinkler ends up getting triggered frequently, you may have to refill it often. Nevertheless, the presence of a water supply makes this sprinkler more portable and makes it more suitable for some areas where a hose-based sprinkler may not be viable.

The sprinkler is particularly interesting for deterring critters because it uses an ultrasonic warning prior to the water, which the company refers to as a ‘one-two punch’. In theory, this may be more effective than simply spraying animals with water. But, some reviewers note that the one-two punch approach means it takes a little longer for the sprinkler to actually spray water, which means that animals have often moved out of the path of the blast.

Another unusual thing about this model is that it is solar charged. This design means that users shouldn’t have to worry about whether or not the battery has charge. Nevertheless, this feature could be an issue for people using the sprinkler in areas that are wooded or that tend to be in shadow.

The balance of reviews for this product suggest that some people are genuinely happy with it, while others find that the sprinkler doesn’t perform well at all. In some cases, it appears that the model simply stops working and multiple reviewers have commented on poor spigot design, which make contribute to this outcome.

If this were a cheap product, I might recommend trying it anyway, simply because the overall design offers a considerable amount of versatility. But, that’s not the case.

Instead, this is one of the more expensive automatic sprinklers out there and you end up paying close to $200 per sprinkler. That’s a pretty major expensive, especially if you need more than one sprinkler to cover your property. With that in mind, this model simply doesn’t seem to be worth the price tag, especially as so many people are unhappy with it.