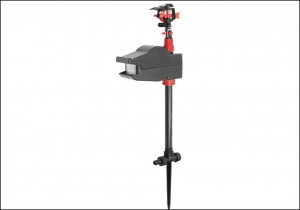 The biggest appeal of this model is the fact that it is currently one of the cheapest options on the market, while still offering the standard features that you find on most similar motion activated sprinklers. Now, the basic concept with this type of sprinkler is that you attach it to a garden hose. The sprinkler has a motion sensor built into it and this means that the sprinkler will fire a short burst of water whenever it detects motion.

In this case, the range of the model is around 32 feet 8 inches and the sprinkler fires for 5 seconds in a 120 degree arc. This is relatively small range compared to many other models and there also appears to be no way to connect together multiple sprinklers to create a system for a larger yard. This is an issue, because many people (myself included) do tend to use more than one sprinkler and it’s much better when those sprinklers can work in conjunction with one another.

In addition to these issues, the sprinkler simply doesn’t appear to work well. This is especially clear on Amazon, where there are just 48 customer reviews for the model and a significant proportion of those reviews are negative.

At the same time, a number of people complained about issues with sensitivity. In many cases, it appears that the sprinkler is simply too sensitive, often spraying water frequently without any apparent cause. Combined with the issue of the hose and sprinkler connection leaking, the end result is that this sprinkler would end up wasting a lot of water.

Now, it is possible to adjust the sensitivity but you may just find that doing so makes the sensor less likely to pick up the pests that you are trying to deter.

Realistically, this model simply isn’t a good choice, despite how cheap it is. Instead, you’re much better off spending the extra money to get a model that is going to consistently behave well and isn’t going to leak all over the place.