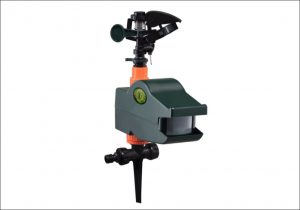 This water sprinkler is another one that isn’t actually available at present through Amazon, although it may be possible to get it via other sources. However, despite this, the model is still worth talking about because it is an appealing option and may well be back in stock in the future.

Like most water sprinkler models, the general idea here is that you connect the sprinkler to your hose. Doing so allows the sprinkler to draw water when it needs to use it, without you having to worry about refilling anything. The model operates using a motion sensor, so it will only spray water when it detects movement. When this happens, the sprinkler will spray a jet of water for roughly 5 seconds.

In this particular case, the sprinkler is able to detect movement for up to 30 feet in a 120-degree range. When the model sprays, it will do so in a 360-degree manner, although there are options to limit the spraying angle as well. Some reviewers for this model do suggest that the stream is more powerful than other sprinklers, which make be appealing if you have pests that aren’t easily frightened.

The sprinkler also makes use of AA batteries to power it, so you will need to change these regularly. The speed at which the model drains charge is entirely dependent on how often the sprinkler activates, so it may take a little trial and error to figure out how often they need to be changed in your situation.

The general approach can be effective, as a sudden stream of water is enough to scare off many pests that enter your garden. At the same time, a sprinkler is a much more humane approach than methods like traps or poisons and there is nothing dangerous to worry about.

However, despite the advantages of the model, some reviewers did complain that it felt a little cheap, especially in terms of the plastic spike. In some cases, the spike can mean that the sprinkler wobbles when it is used, especially as the model ends up being a little bit top heavy. At the same time, some reviewers noted that the model was oversensitive, often reacting to wind or light and shadow. However, as with most models, this is adjustable.