How To Keep Feral Cats Out Of Your Garden 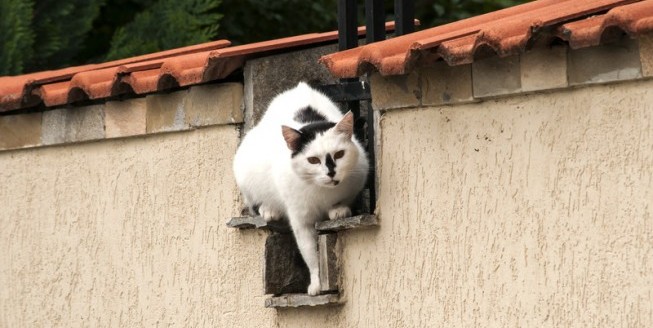 Whether they’re feral or housecats, outdoor cats can cause major issues for any garden. They might decide that your flower bed makes the perfect litter box, or that your yard could use a little landscaping. Keeping cats out of your gardencan seem tricky because they are so unpredictable and have a tendency to do exactly what they want to.

If you haven’t read my entire excruciating story of the 6 month battle with feral cats, you should check out the home page of Motion Sensor Sprinkler Dot Com. It’s a harrowing tale that ends happily, with no cats harmed.

So, how do you go about keeping them out? Often it’s a matter of figuring out what will work for your specific situation and the specific cat (or cats) that you are dealing with. However, there are a number of different approaches to try.

Changing the Texture Of The Ground

Cats find gardens appealing because of the texture, especially if they are using the garden as a litterbox. Specifically, they like sand or soft dry dirt. Bark, mulch, and anything they can dig in works just fine for themIf you can change the texture of your garden, you can help to stop cats from using it.

A common tactic discussed is to cover the dirt with bark (which also looks nice). This has a very different texture and supposedly isn’t particular appealing to cats. Unfortunately that didn’t work for me, and fact, I think they preferred it to the dirt that was there before.

Rocks can also have a similar effect that I actually saw results with. I covered about 40{7f9387c79db342d74f819f20ed1ec970ac2a151541b36a023f4c9355294c0a51} of non-grassy areas of my yard with river rock because rock looks nice, and it was a simple fix-all. There was only one instance of a stubborn cat actually pooping on the rock bed. I was livid, but it never happened again, so I guess it wasn’t a pleasant experience for him either.

Other people choose to place things in the soil that can change its texture. Pinecones and egg shells can both be used for this purpose. Placing branches in the garden can also help to change the texture.

A more extreme variant is products like spike mats. These types of mats don’t actually harm the cat, but cats don’t like walking on them, so they will tend to avoid any areas with them.

All of these require time, money, and consistency to to work properly.

Deterring Them With Smell

Cats have a strong sense of smell, so smell can potentially be a way of keeping them out of certain places – like your garden.

One smell that cats don’t particularly like is citrus. So, you can use citrus peels around the edge of a garden to try and deter them. You can also use a citrus-based spray or may your own by dissolving a citrus essential oil in water. However, this method has its risks, as citrus may attract other animals, such as raccoons.

Some other natural scents that can potentially deter cats include cayenne pepper, black pepper, rosemary, coffee grounds and dry mustard powder. However, you may have to be creative in using these in your garden.

Specific plants can also act as a deterrent. This is one of the easier approaches for deterring cats, as it is simply a matter of growing the plant in the garden. Lavender is a commonly quoted example of a plant that works like this, and other plants include lemon thyme, geranium and rue.

You can also get spray odor repellants from hardware and gardening stores. These are specifically designed to repel cats and aren’t likely to attract any other types of animals. They work best if you are trying to keep cats out of a specific part of the garden (rather than the whole garden) and you have to renew the spray regularly.

If you are trying to cover a large area you can also use odor granules, although these will still need to be renewed on occasion. Any kind of store-bought repellent is going to get costly over time, so keep that in mind.

In my experience, I tried 3 different types of store bought repellents, rosemary oil, pepper flakes, and planted several lavender plants around my yard. None were effective. My most extreme effort was to buy a jar of bhut jolokia powder, which is the previous world record holder for the hottest pepper in the world. I mixed it up with some water in a roundup sprayer and sprayed my entire yard, ground, shrubs, etc.

It had no effect.

You can also use barriers to stop cats getting into your yard or into your garden. This was the most effective thing I tried.

In theory, keeping cats out of your yard altogether is the easiest approach and good fencing may be enough to keep cats out. However, cats are resourceful and fencing can be expensive, so this does have its limitations.

Instead, you can focus on stopping the cats from getting into specific areas your garden. Some people use chicken wire to stop the cats from digging in the garden. Chicken wire can be a pain to cut and shape properly, and looks kind of ugly if you put it all over the place. I found it really hard to maintain over time because I kept needing to get to my plants and replace the wire.

But it really does restrict what cats are able to do in the garden. The same is true for plastic netting. I had really good success with bird netting. In the beginning, the cats really gave it a college try to get under the netting, and did find areas where the net was loose. Like I said, these cats were insane. But after several tries, I finally blocked all the holes and used stakes to keep the net taught.

From the road, you can’t even tell that all my flower beds are covered in bird netting, so I just left it up. Over time, the plants grow into the netting which isn’t the best, but I can cut/replace the netting at a later date.

One way of keeping cats out of your garden is to give them somewhere else to go. Cats are naturally attracted to sand and they will tend to use this as their own personal outdoor litter box.

However, there’s a catch to this (isn’t there always?). If you want to take this approach, you are still dealing with cat poop and you actually have to scoop it out regularly else the solution won’t work for very long.

Likewise, you can also plant catnip in areas of the garden where you do want the cat to be. This can keep cats out of specific areas, but again, you still have to deal with them and their messes. This makes you a slave to your cat master, which over time, will certainly play on your mind. How can you bow down to some stupid feral cats, especially if it’s the crazy neighbor’s fault for feeding them (even though you talked to  her several times about it already).

The Most Satisfying And Effective Method

Eventually, after all these attempts at blocking cats from specific areas, they started pooping on my lawn. One cat actually discovered that he could make me even more mad by laying a fresh pile right in front of my back door each night. What the hell kind of cat poops on a lawn anyway? Once, I found a muddy hole that someone dug, which to me seems really out of character for a feline.

Whatever. I was fed up.

So I bought 4 motion sensor sprinklers and covered my entire front and back yard as well with infrared technology and water spraying power.

It was an imperfect system, and it was not an instant success. But consistent spraying over the course of 4 winter months, and I was able to get the problem down to pretty much nothing. They finally learned to go somewhere else less scary, less wet, and less troublesome. I eventually unhooked the sprinklers and haven’t used them for over a year, and no longer have any incidents.

I actually used a model called the Contech Scarecrow, but this brand has ballooned their price to $150, so now I’m recommend a higher quality brand that’s selling for less called the Orbit Yard Enforcer. It has good reviews on Amazon, night/day settings, and custom spray zone settings.

Best of all, it’s extremely satisfying to know that YOU stayed your ground and beat these animals, and if they ever come back, reminding them is as simple as hooking up your sprinkler and waiting by the window to see the results.