How To Keep Opossums Out Of Your Garden 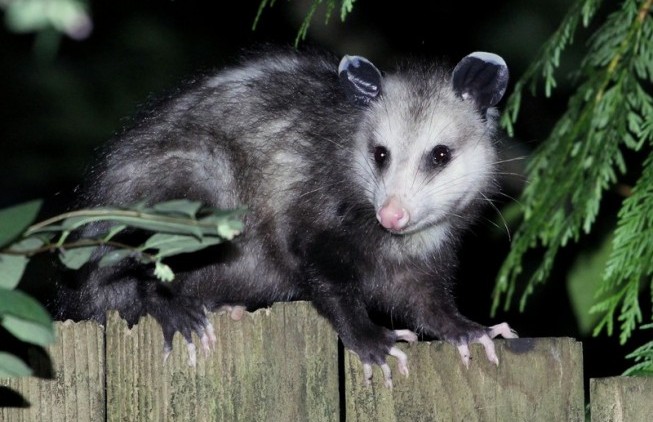 In general, opossums don’t tend to be as destructive for gardens and yards as other wildlife, but just having them around to fight with your pets can be frustrating enough. The animals can grow quite large, which makes them a slightly concerning feature in the garden and they are quite happy to tear into your outdoors trash or even any pet food that you left out.

When I lived in Riverside, CA my roommate had a can. Any night we would leave food out, the opossum would dig into the bowl without a care or concern about who was around. It also had a couple babies hanging around that would sneak into the shed and scare the crap out of me every time I went to grab some tools.

One advantage with opossums is that they don’t tend to travel very far from their dens. So, if you can stop your garden being an easy food choice, they are likely to go somewhere else instead.

The first approach for doing this is pretty simple. It involves making sure that you aren’t leaving easy food out there for opossums.  As mentioned above, they definitely like cat food. Even residue left in the bowl or a few crumbs on the deck is enough to satisfy the midnight munchies.

Don’t forget to make your garbage more difficult to access as well. These are fat suckers, but they can climb, and will not hesitate to jump in an open can or tear open plastic bag. One time we had one member of the opossum family crawl into a bucket with some vegetables left in and the poor thing was stuck there for several days (we didn’t know it was in there)

For the garbage, one solution is to invest in more heavy duty garbage cans with secured lids, so getting into the garbage is a challenge for any pest. You can see in the image below that this raccoon and bear proof lock is basically some bungee cord, so you could probably cook up your own with some bungees from Amazon. 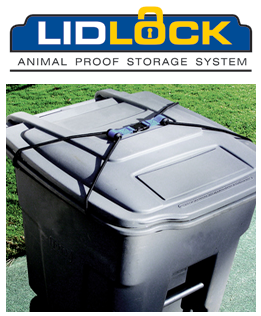 Likewise, you also want to make sure any bird feeders are somewhere that opossums can’t reach and that there isn’t any spilled birdseed on the ground. Harvesting fruits and vegetables when they are ripe is also important, as is making sure there are no rotten fruits or vegetables hanging around.

This method is especially important for any potential food source, even if you don’t think it smells good, because the scent is a key thing that attracts opossums to your garden.

At the same time, it’s also a good idea to make sure that opossums can’t get into any enclosed areas, like under decks or in the roofing. Ideally you should repair any holes that might offer access and place screening across any vents. This helps to make sure that you don’t end up with a nest of opossums on your property.

Use Smell and Taste To Your Advantage

Scent can sometimes be an effective way of making opossums less interested in your garden! There are specific scents that they don’t like, and if you include these scents in your garden it can be enough to scare them away. The same is also true for taste, and there are some flavors that opossums really don’t like.

One commonly quoted trick is to dilute molasses with water and use this as a solution to coat leaves. A little dish soap can even be added to the mix to make it stick a bit better onto the leaves of plants. This mixture can make the plants taste very unappealing.

Most spicy products and mixtures are also good to mix in for a taste-based repellent and this lets you make your own repellent pretty easily. You can use a spray bottle to make it easy to apply the repellant to the leaves of plants.

However, as you can imagine, this isn’t a good choice for any plants that you plan on eating. If you have a large area with many entrances, you might also run into the problem of volume. Spraying your entire yard with molasses and soap isn’t my idea of a nice weekend, and  you may have to repeat the process after a rainy day, or even just to refresh the smell.

Another type of scent-based idea to try is mothballs. These are really designed to keep moths away from fabric, but they work surprisingly well for opossums. They are most effective in enclosed spaces, such as when you are trying to get opossums out of crawlspaces and other tight quarters.

Some people also choose to use predator urine, such as urine from coyotes. This can be found in many stores and can be sprayed around the borders of the property. I’ve read about this in many forums and it’s supposed to help with a variety garden pests, as it convinces them that the territory is already claimed by a bigger predator.

However, I’m not sure I want to be stocking up on predator urine regularly (how to they get that stuff anyway?), nor do I want my kids playing in the yard after I just sprayed it with wild animal pee. I guess you don’t need that much to be effective though.

If it’s legal in your area, trapping opossums is also an option. With this approach you are aiming to release the opossum away from your home so it stops being an issue. Traps can be obtained from a range of places, including pet stores and hardware stores, and can be baited with fruits and vegetables.

While trapping opossums can be a good way of getting them out of your garden, sometimes it isn’t a good long-term solution. In some cases, especially in rural areas, you may find that other opossums move into the recently vacated territory. Nice place! I wonder why the last guys moved out…

In this case, you might find that the multi-prong idea I mentioned earlier in the post would work. Remove the food source, use repellant consistently for a period of time, and catch/release new critters as they move in. It will take some diligence, but eventually you can get rid of them.

One last option is to try a motion sensor sprinkler. This may or may not have the effect you want, and I’ll tell you why.

They work on infrared sensors and will spray a shot of water if anything comes in the path of the sensor. They are pretty accurate at detecting things moving in day or night, so are effective even against nocturnal critters.

As I said earlier, we had a family of possums at our place in Riverside. My friend was especially worried about his cat getting into a fight with the opossum because he didn’t want the cat to get rabies. So every time he saw it, he’s get a big spray bottle and shoot water in it’s face. No effect. He even grabbed a hose one time and soaked it. Nothing.

It was obviously scared, and though not really ‘playing dead’, it clearly wasn’t going to run away.

So the reason this might not work is that if it shocks them into fear, they might just get scared and then start moving again once the fear subsides.

However, one thing to keep in mind is that over time, they will figure out that going into this area means a face full of water.  It’s pretty obvious that over time they will learn not to venture into the path of the sprinkler.

Since motion sensor sprinklers are the topic of this website, I have some recommendations for you to check out. My top pick at the moment for best value is the Orbit Yard Enforcer (review), and you can see the full list of motion activated sprinkler reviews here.

Have you tried any of these things to rid your garden of opossums and what worked for you?